G-SHOCK and New Era are standing for constant innovation and lifestyle products. Few brands are as deeply rooted in urban culture and hip-hop as these two world-renowned style icons. The 100th anniversary of New Era is therefore the perfect time to continue the cooperation between the two brands. Designed down to the smallest detail

One of the two straps is deliberately inspired by the unmistakable cap design familiar from the classic New Era caps. Thus, a textile wristband made of the same material as the caps was chosen, with additional leather trim and a green inside.

Furthermore, the anniversary model contains a second interchangeable watchstrap made of robust resin, which has a golden metal loop with engraved New Era logo - the golden accents are inspired by the unmistakable size sticker on the peak of each New Era cap, which is especially reflected in the display. 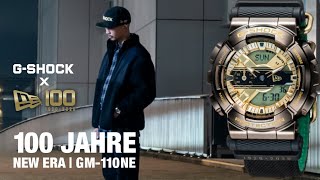